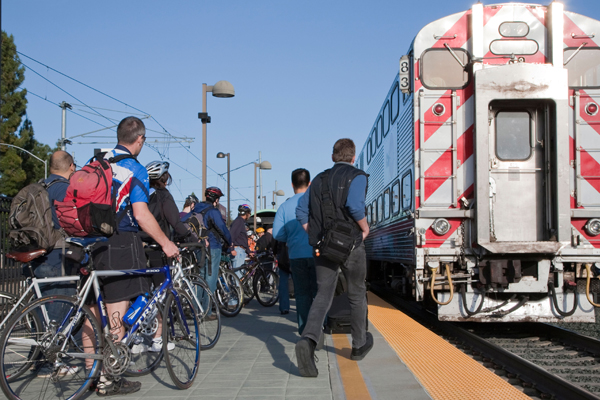 Stretched alongside the Hillsdale Caltrain Station in the middle of the Peninsula, Bay Meadows makes it a cinch to get around. No car required. Commuting to Palo Alto? Jump on board and be there in about 20 minutes. Heading to San Francisco? Arrive in a little over 30. With so much happening at — and around — Bay Meadows getting to wherever you want to go is just a hop away. (Or, if you prefer, a pedal or stroll.) According to recent surveys we’ve conducted, a full 56% of Bay Meadows residents ride Caltrain regularly. Impressive by any count.

Josh, a resident who commutes to San Francisco, embraces living on the Caltrain corridor. “I haven’t had to get into my car for three weeks. I love it! I get my exercise walking back and forth between my work and the Caltrain station. Then it’s a quick hop home.”

The inbound commute to Bay Meadows is just as active as the outbound one. Being able to rely on transit is a huge plus for the workers and students who spend their days here. Survey Monkey, which opened its Bay Meadows headquarters in 2017, says that 50% of its workers commute on Caltrain. And Nueva School, a private high school campus at Bay Meadows, is the first school to provide Caltrain’s Go Pass to all its students, faculty and staff in addition to implementing a “no student drive” policy (students must be dropped off in carpool, ride the bus, bike, walk or take Caltrain). The Go Pass can be used in any zone in the system. Nueva also provides secure bicycle storage and showers.

Just as great, the city and county of San Mateo along with Caltrain and California High Speed Rail just broke ground on the long-awaited Caltrain grade separation project for the Hillsdale station. The project not only raises the tracks and lowers the road at E. 25th Avenue it also completes east/west grade street separations at 28th and 31st Avenues, which currently dead-end — opening access between areas east and west of the tracks.

For people who want to live a transit-friendly life, Bay Meadows has it all. “I used to live in an East Bay community,” says resident James. “There, I had a house with a yard and owned three cars, used 7 days a week. As a resident of Bay Meadows and 5-day a week Caltrain passenger, I drove fewer than 1200 miles in the past year and now plan to get rid of two cars. This was made possible entirely because of Bay Meadows and its public transit-oriented design.”