Get ready to roll San Mateo… Join Bay Meadows on May 8 for the 20th annual Bay Area Bike to Work Day #BTWD2014!  One day each year, on a warm May morning, Silicon Valley Bicycle Coalition encourages commuters to leave their cars at home and join the tens of thousands of their fellow Bay Area residents in biking to work. The weather is perfect, the streets filled with cyclists, and energizer stations dot the landscape, staffed by volunteers eager to pass out treats and encouragement. Bike to Work Day is a vision of what the morning commute should look like: Parents and children, office workers, politicians, CEOs, all doing the unimaginable – enjoying their trips to work and school.

Where: Saratoga @ Franklin Pkwy in front of Kaiser – 1000 Franklin Parkway
When: May 8 from 7-10am
What: Refreshments, Bike Bells, Water Bottles, Peninsula Bike Maps + a chance to WIN a PUBLIC Bike
Map it: Click here for San Mateo + Santa Clara County Energizer Stations
SVBC will host a station from 6-9am at the Hillsdale Caltrain Station (North end of Northbound Platform) Maybe you want to be like Josh, who zips from his Bay Meadows home at Amelia, on bike to Caltrain, then heads to work.  A refreshing commute on two-wheels is what Bike to Work Day is all about.

We asked Josh for a bike commute tip and here’s what he said:
”So I have a folding bike by a company called Citizen – I sing its praises as often as I can, and just makes it easier for when you don’t’ want to leave your bike outside or you can simply fold it up in a trunk.”

Or Aparna, who commutes to SF for work once a week with a group, leaving from the Hillsdale Caltrain station and exploring different routes every chance they get.

Aparna says,“ I have the Camelbak backpack for water whenever we go for longer rides, holds meters of water. Really helps.”  In her “downtime”, Aparna likes to ride from Delaware Street to the entire Bay Trail, North Delaware to downtown Burlingame and is looking forward to biking Crystal Springs Road soon.

Visit the Bay Meadows Energizer Station – Win a Bike – Grab a Water Bottle and a Bike Bell
Swing by the Bay Meadows bike-to-work station on Saratoga at Franklin Pkwy (in front of Kaiser’s Medical Office), sponsored in partnership with Kaiser and Whole Foods, to say hi and grab some high-powered snacks.  Bay Meadows will be giving away water bottles, bike bells and our new bike maps that showcase the best of biking on the Peninsula on May 8th between 7am-10am. 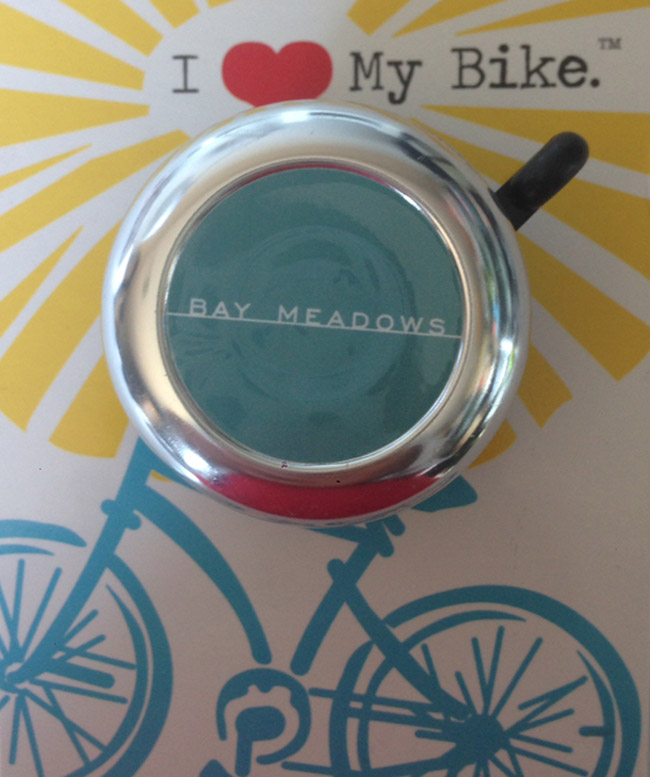 Don’t own a bike? Well, you could soon. In the spirit of Bay Meadows’ commitment to sustainability and, well, bike-ability, we’re giving away a PUBLIC Bike to one lucky Facebook Fan. Share the link with your friends for more chances to win. Deadline to enter is May 8, 2014 at 10:00AM PST.

May is Bike Month – You Can Bike There
It sounds simple because it is. The large turnout each year makes such a visible presence of bicyclists that motorists actually take notice, slow down, and make room. Everyone’s commute is improved when people take to the streets on bikes.

Don’t limit yourself to just bicycle commuting to work. Try riding your bike whenever possible during the month of May. Bicycling provides a great opportunity to enjoy the fresh air and get some exercise while you go to school, visit a local farmers market, meet a friend for lunch at a restaurant around the corner, or any another destinations you may have planned. http://www.youcanbikethere.com/

Show Us Where You Bike – Strike a Pose and Share Your Bike Fashion
Fame x Frame Photo Contest
As we develop community, we want to see how you live or play at Bay Meadows. Share your fun lifestyle photos with our community by using #baymeadowslife. You could WIN $50 or our Grand Prize of $500 at the end of 2014 and be featured in a live pop-up gallery exhibit event. View official rules here: http://baymeadows.com/photocontestrules/